Following a Dream – On the Road with Our Airstream Trailer 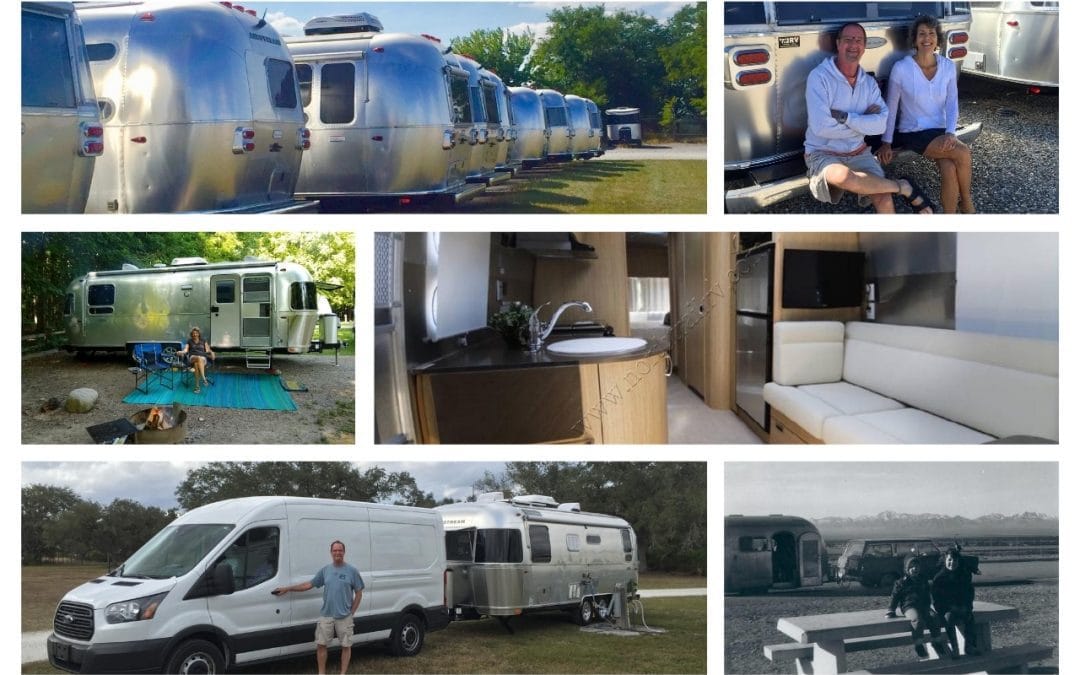 As a child, it seemed like we were always on an adventure. My parents weren’t the car camping types. Home was where you laid your head whether it was on a mountain, by a rushing river, in a snowbank or in the station wagon. One year we got an Airstream trailer! For them it was only a phase, but for a couple years it was my “fort” whether we were on the road or it was parked in the yard. I never forgot that shiny silver nest. I knew one day I would have my own.

That day came in January 2019 while my husband Claus and I were on an art show tour in Florida. We were staying in a lovely rental on a canal, but we were spending a small fortune on rentals for the 4-5 months a year that we do art shows. Then there’s the constant move in, unpack, repack, move out. It’s not like being on vacation!

Our conversation drifted to traveling in our “own home”. Many artists life in RV’s traveling the country from show to show, but it’s not as simple as it seems. Previously we agreed that towing a trailer was the best fit. I, of course, lobbied for an Airstream trailer at every opportunity. Turns out there was an Airstream Dealer in the area… why not take a look. We met with Bruce (Tall Guy) Miller at Airstream of South Florida/North Trail RV. Their inventory was all shiny and brand-spankin-new. After a once over we settled in a 25’ Flying Cloud model. For almost 2 hours Bruce painted the pictures of our life with an Airstream as our home. We saw the life but found that used units are elusive and new we thought too expensive. Fast forward past debates about new vs used, timing and money to sitting in the RV lot in the same trailer talking to Bruce as if buying a new Airstream was a possibility. With a cross between excitement and healthy skepticism we awaited the dreaded price negotiation. The stars aligned and we bought the very same 25’ RB Airstream Trailer that we sat in for hours talking to Bruce. Our dream became a reality! We named her “Clover” and she is our home as we travel the country for art show.

Living in a travel trailer is similar to living on a cruising sailboat. We monitor power, water & waste, how to get it and where to get rid of it. We use apps that tell us where we can get LP, dump waste, or park for the night. We’ve learned new terms that would make my dad cringe like “glamping”, (glamour plus camping). Claus loves “full hook-ups”, but power & water are more the norm. When we’re in route we use a private network called Boondockers Welcome or the local Moose Lodge. Once we reach a destination we may stay for a weekend or 10 days. We spend a month or 2 in Florida every winter at an RV park, but in the summer and fall you’ll find us at State and National Park Campgrounds.

Sound like fun? Well, there are a few details that are still a challenge, like parking! There aren’t enough back-up cameras to help us navigate the endless obstacles from trees and hills to other RVs and light poles. We’ve almost needed marriage counseling a few times. Once the van is unhooked, we get settled; this includes levelers, stabilizers, hook up utilities, unroll the awnings, lay down the carpet, & unfold the chairs. Oh, then there’s the collapsible recycling bin, the broom & Claus folding bike. If we’re staying for a time we might even put up the screen room and get some firewood. Time for lunch!